VirES for Swarm is a highly interactive data manipulation and retrieval interface for the ESA Swarm constellation mission products. It includes tools for studying various geomagnetic models by comparing them to the Swarm satellite measurements at given space weather and ionospheric conditions.

Here is a demonstration of the main features of the VirES for Swarm web user interface.

Slides with detailed information on service usage can be found here.

Various Swarm product data can be visualized on the platform plotted over the globe and shown in a scatter plot. The scatter plot allows for dual y-axes with independent zoom and panning features. Different variables can be plotted in multiple vertically-stacked plots sharing the common x-axis. The time slider and various controls offer the possibility to make selections and set criteria for data filtering and visualization which immediately take effect on the display.

The subset of Swarm data selected by the user in this way can be downloaded in different file formats. The downloaded data can be combined to fit various use cases.

VirES allows visual and numerical comparison with geomagnetic models, analysis with respect to various ancillary data and generation of publication-ready plots and diagrams in an intuitive and powerful yet customizable interface.

In addition to the web graphical user interface, the data can be accessed directly trough the VirES server API using an alternative client such as the VirES Python client.

Selected datasets can be also accesses through the Heliophysics API (HAPI). For more details about see the description of the VirES for Swarm HAPI server. 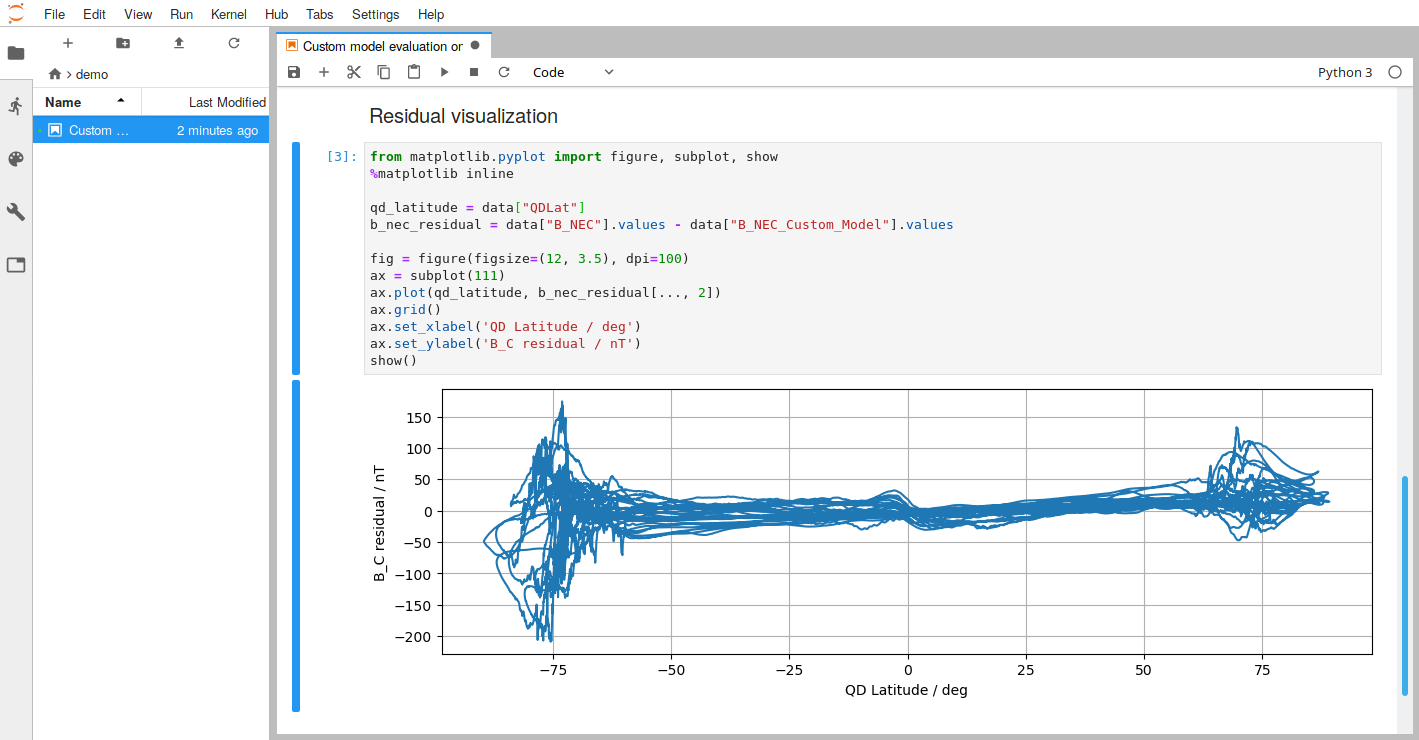 The direct data access using the VirES Python client can be performed in Jupyter notebook running in the VirES for Swarm Jupyter based Virtual Research Environment (VRE).

Data from the following Swarm products are available in VirES:

These datasets can be accessed with the VirES Python client, readily available in VRE.

The following models of the Earth's magnetic field and its components (core, crust, lithospheric, magnetospheric, and ionospheric magnetic field) are available

The global context of space weather is provided in form of:

The data accessible on VirES consists of the newest versions available and any new data will appear within 4 hours after being published.

To access Swarm data you simply sign up (register) as a user by providing user profile information such as username, email and optionally title, country, institution and an executive description of the project in which your Swarm data is being used.

Feedback and ideas are very welcome, feel free to contact us under feedback@vires.services.